Jennifer Lawrence is the best thing to happen to Hollywood in years. And by far my favorite part of the Oscars. Everyone keeps talking about her tripping on her way to accept her Oscar, but can we please talk about this?

Jennifer Lawrence graciously accepting her Oscar for Best Actress for her role in Silver Linings Playbook.

I finally got around to seeing Silver Linings Playbook last night, and I was certainly not disappointed. I must admit, I knew very little about the film going into it, other than that it starred Bradley Cooper–which, in all honesty, would have been enough for me, I mean, have you heard him speak French??–and that Hunger Games‘ Jennifer Lawrence successfully broke out of her adolescent adventure star image, winning the Golden Globe and snagging the Oscar nomination for best actress for her role as Tiffany.

Lawrence gives an incredible performance as the angry and troubled widow, despite the fact that she is far too young to have had the heart-wrenching experiences of her character. Cooper, classic leading man and People Magazine’s 2012 Sexiest Man Alive, is also surprisingly brilliant as the bipolar and socially awkward Pat, recently released from a mental care institution where he was sent after a violent outburst. Both Tiffany and Pat share a certain ineptitude in social situations, specifically manifested in a blunt honesty and openness that is both brutally cruel and hilariously genuine, providing some of the most amusing dialogue in the film.

It’s always a balancing act to attempt a comedy about mental illness, but Silver Linings Playbook approaches it in an entirely endearing and satisfying way. These supposedly “crazy” characters don’t really seem all that crazy because their situations and admittedly dramatic reactions to them are entirely understandable. We sympathize with the distraught Pat, who–despite having a cheating scumbag for a wife and a well-meaning but neurotic father with a gambling addiction who is also prone to violent outbursts (played so touchingly by Robert De Niro)–is genuinely trying to better himself. In short, we can relate to these characters because in reality, we’re all a little neurotic. 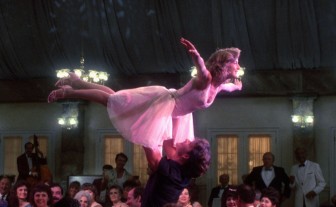 And I can’t help but love the dancing elements of this movie–I’m a sucker for anything to do with dance, from Dirty Dancing to So You Think You Can Dance?–and Silver Linings Playbook picks up on some of those classic dance movie tropes, but puts a new twist on them. In pretty much every dance movie, there’s some big lift that gets built up and the audience is expecting to see it at the end–will they pull it off or will they fall flat on their asses? Well, Tiffany and Pat don’t exactly fall on their asses, but they do mess up enough to end up with a hilariously awkward lift that gets the whole theater laughing, turning this traditionally dramatic moment into comedy.

Check out this great review of Silver Linings Playbook that talks a little more about the surprisingly perfect casting and the impeccable interweaving of all of the different characters and their neuroses into a complex and compelling story that moves the viewer both to tears and to laughter.

Every single one of us is at least a little fucked up mentally. Obviously some people have worse conditions than others, but deep down there’s something tweaked within all of us – it’s part of the human experience.  And that’s what makes Silver Linings Playbook, the new movie from writer-director David O. Russell based on the novel by Matthew Quick, such an impressive piece of filmmaking: the lead character is described is an undiagnosed bipolar locked up after a violent attack, but his recovery and the sometimes cockeyed support he gets from his loved ones only exposes the fact that none of us are anything close to what could be described as “normal.”